A 10-year-old girl could be charged with murder after fatally shooting a woman who was arguing with her mother.

The girl’s mother, Lakrisha Isaac, 31, got into a fight over a past dispute with Lashun Denise Rodgers, 41, at the Jernigan Gardens Apartments on Mercy Drive on 30 May.

At one point during the altercation, Isaac handed her daughter a bag, which had a gun inside. The girl, who hasn’t been named, then reportedly fired two shots at Rodgers, who was later taken to a hospital where she died, reports NBC.

The young girl was arrested on Tuesday (June 7) and has been charged with second degree murder. Isaac is also in custody.

According to Rodgers’ boyfriend, the girl, who was still holding the gun, said: “She shouldn’t have hit my momma,” the police filing stated.

“It couldn’t have been self defence,” a member from the Rodgers family then said. “Your child should have been in the house at this time of night or even why you dealing with anything.”

“We anticipate that whatever charges we eventually file, if any, will ensure she receives the interventions necessary to address her behavior, help her change and grow, and ensure the public’s safety going forward”

Back in a 2020, Worrell was discussing what age should constitute jail time in the US, saying: “I believe that the minimum age of arrest should be 14 and I believe very much and very strongly that there is a school to prison pipeline.

Worrell added: “Arrest, prison, jail, those are traumatic experiences that significantly scar our children for the future.

Well, ABC report that the number of children sent to adult courts for criminal prosecution in the U.S. has dropped to new lows.

Naomi Smoot Evans, executive director of the Coalition for Juvenile Justice said: “We see across the board for young folks, regardless of what they may be charged with, that what works is community-based intervention, what works is connecting young folks with people in their own communities, letting communities lead reform efforts.” 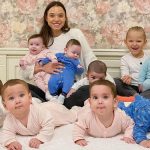