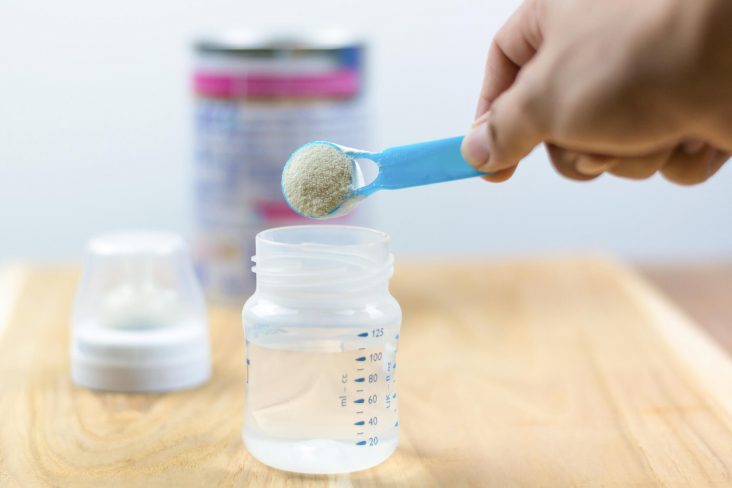 When selecting a baby formula:

Verify that it has not expired.
Make sure the container is in good shape and has a tight closure. Do not give it to your baby if there are any leaks, puffy ends, or rust patches.
Verify that it is not marked “for toddlers.”

Making homemade infant formula at home is not advised, according to the FDA and the American Academy of Pediatrics. Making your own infant formula puts your kid at risk for major health issues. Particularly during the first year of life, your kid has particularly specific nutritional needs. Homemade newborn formulae could have an imbalance of essential nutrients, like vitamins and minerals (like iron).

Additionally, there may be a higher danger of contamination with homemade infant formula, which could make your baby sick or infected. Additionally, the sterility of commercial powdered formulae cannot be assured. To ensure that these items are safe, FDA regularly inspects both the manufacturing facilities where they are created and the products themselves.

Infant formula sold in other nations and marketed as “natural” or “organic” is allegedly better for babies, according to some public statements. There is no scientific proof, though, that these infant formulae are superior to the commercial infant formulas available in the US. FDA inspection is required for all infant formulae that are sold lawfully in the US, regardless of whether they are domestically produced or imported. The American Academy of Pediatrics advises against using formulas that have been illegally imported, such as those that can be purchased online through independent distributors. The FDA might not have examined these items. It’s also possible that formulas imported illegally weren’t transported and stored properly.

Milks, drinks, or formulas for toddlers

The nutritional requirements of young children can be satisfied without the use of toddler milks, beverages, or formulas. They frequently have additional sweeteners. Your baby can start drinking plain whole cow’s milk or fortified unsweetened soy beverage at the age of 12 months.

Infant formulas made to suit a baby’s nutritional demands should be given to infants younger than 12 months. They shouldn’t be given toddler-specific formulas, beverages, or milks.