One of the perks of pregnancy is nine-or-so months of skipping your monthly flow, but after the baby is born, it’s only a matter of time before you’re back in pads or period underwear.

If you’re breastfeeding your baby, you might experience many menses-free months, especially if you are nursing exclusively. If not, Aunt Flo could pop back sooner rather than later.

So when will your period return, and how heavy will it be? Here’s what you should know about your first postpartum period.

When should you expect your first period after giving birth?

While it’s impossible to pin down the timing with any certainty, your first postpartum period may hinge on your breastfeeding regimen. The reason? It’s a hormonal thing.

Women who breastfeed exclusively and frequently do not, in most cases, ovulate. And if you’re not ovulating, you’re probably not having a period. (You can still get pregnant while you’re breastfeeding and before the return of your period, though. More on that below.)

Generally speaking, here’s when you can expect your period to resume:

Will your first postpartum period be heavy?

In short, there’s no typical pattern for the first period after having a baby. Some women may have heavy, painful periods. Others may enjoy light, easy periods. Many women are surprised to find that their first period after baby has more blood clots in it. You can use tampons once it’s been four to six weeks since you gave birth and with your doctor’s okay.

Your postpartum flow may depend on your choice of birth control. If you’re not breastfeeding and decide to go back on the pill after giving birth, you may have a lighter period.

Can you get pregnant before you get your first postpartum period?

Even before your period resumes, you can get pregnant again — and don’t let anyone tell you otherwise. That’s because ovulation precedes menstruation in the monthly cycle.

So unless you’re planning on back-to-back babies (and doctors advise against that because of the possible risks), you’ll want to use birth control as soon as you start having sex again — which likely won’t be for at least four to six weeks postpartum if you had a vaginal delivery.

All types of contraceptives are safe to use while you’re breastfeeding. But keep in mind that your contraceptive needs may have changed.

For example, if you used a diaphragm or cervical cap pre-pregnancy, you’ll need to have it refitted by your gynecologist, as your cervix may no longer be the same size. It can take six weeks after the birth of a child for your cervix to return to normal.

Because estrogen can reduce a woman’s milk supply, birth control methods containing the hormone aren’t recommended until breastfeeding is well-established, around six weeks after giving birth. Instead, your practitioner may prescribe what’s known as the “mini pill,” which is considered safe during breastfeeding.

It’s also best to wait at least three weeks before starting a birth control method that combines estrogen and progestin, like the pill or the patch. The reason? Women are already at greater risk of developing blood clots in the postpartum period. These combined hormonal methods can up the risk.

Don’t confuse the heavy bleeding after giving birth with your period. Your body is still shedding the blood, tissue and mucus that lined your uterus while you were pregnant. It’s called lochia, and it’s not the same as your period.

Lochia starts out bright red and often contains many blood clots. The flow will be heavy for three to 10 days after delivery. As it tapers off, the color morphs from red to pink to brown and then a yellowish-white hue.

Light bleeding can continue for a month or longer, so keep a supply of sanitary pads handy. By the way, moms who have C-section deliveries may have less lochia than women who deliver vaginally.

Contact your doctor immediately or call 911 if you experience any of these signs of postpartum hemorrhage, a dangerous type of bleeding that can occur up to 12 weeks after giving birth:

Is it normal to have irregular periods after giving birth?

There are no guarantees when it comes to your period after pregnancy. You could start having periods like clockwork — two to seven days of bleeding every 28 days, on average.

Or they could be irregular, meaning the length or duration of your cycle is longer or shorter than usual. You might even miss a period. Again, your breastfeeding status can play a role. If you get your period back but you’re still lactating, for example, you can have irregular periods. Over time, it’s a good bet that your period will return to what used to be normal for you. But if your period goes missing for months, or if you have questions or concerns about your post-pregnancy body, it’s best to check in with your practitioner. 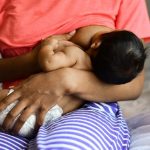 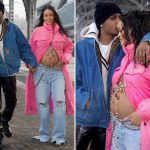