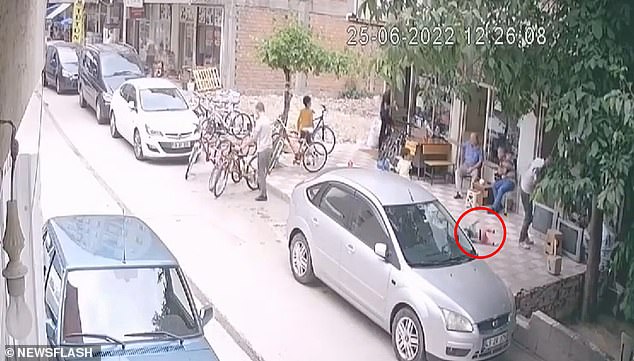 CCTV footage captures the moment a one-year-old tot plummets headfirst from a balcony but is saved by bouncing off the back of a stunned shopper below.

Unwitting hero Ruhi Asci was gazing through the window of a shop when the baby slipped between railings and fell from the first floor, hitting him below his shoulders.

The youngster can be seen bouncing off and landing on the pavement behind him in the Haci Ilyas neighbourhood in the northern Turkish city of Amasya.

Astonished, Ruhi turns around and finds the baby, named as Khatira Amiri, sitting on the concrete.

As he picked up the youngster, the child’s Afghan-born mother came running out and the baby was rushed to hospital by paramedics.

Local media reported that Khatira had been playing on a first-floor apartment balcony when the tot slipped through the railings.

Amazed Ruhi said: ‘At first, I thought a flower pot had fallen on me. When I turned around, I realised it was a child.

‘They rolled off my back and hit the ground. A little blood came from their mouth and teeth.’

Asci added: ‘The ambulance arrived on the scene and they were taken to hospital with their mother.’

Reports said the child was admitted to hospital in a stable condition in the company of their mother.

It is unclear if the local authorities are investigating the incident. 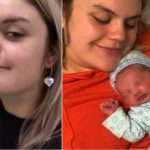 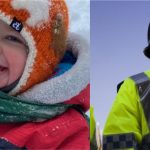