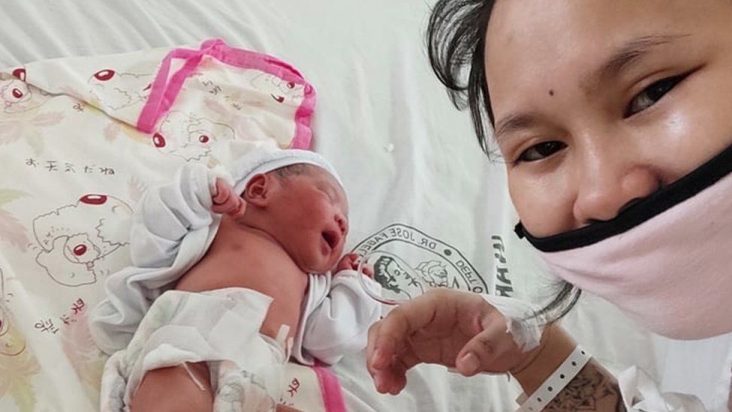 The death of a three-month-old baby separated from her jailed mother despite pleas to keep the pair together has shocked the Philippines, reports the BBC’s Preeti Jha.

Reina Mae Nasino, a human rights worker, didn’t know she was pregnant when she was arrested last year in Manila. She put her missed period down to the stress of a night-time police raid in which she was arrested, alongside two fellow activists.

It was only during a medical examination in prison that the 23-year-old found out she was in her first trimester.

The death of Ms Nasino’s newborn last week – less than two months after the baby was removed from her care – has raised questions about the treatment of Philippine mothers in custody as many voiced their anger at the justice system for failing the child.

Ms Nasino, who worked for the urban poverty group Kadamay, was arrested in November 2019 with two fellow activists after police raided an office where they lived at the time.

They were charged with the illegal possession of firearms and explosives – charges all three have denied. They say the ammunition was planted by authorities amid a widening crackdown against left-leaning activists.

Despite the circumstances, Ms Nasino “was quite excited to be a mother”, her lawyer Josalee Deinla said. She was prepared for the challenge of giving birth in custody and aware the legal proceedings were likely to be lengthy.

But as the Covid-19 pandemic hit the Philippines, her concerns grew rapidly. The National Union of Peoples’ Lawyers, a legal aid group representing Ms Nasino, filed a series of motions calling for her release.

The first one in April urged the temporary release of 22 political prisoners most vulnerable to contracting the coronavirus, including Ms Nasino. Later motions asked the court to allow the activist and her baby to remain together in hospital or at the Manila City Jail where she was detained.

“We were shocked that the court would deny such a plea. The judge only needed to consider the motions from her own perspective as a human. But unfortunately compassion and mercy were not extended to mother and child,” said Ms Deinla.

River Masino was born on 1 July. Her birth weight was low but after a few days she and Ms Nasino returned to Manila City Jail where they stayed in a makeshift room reserved for them.

Under Philippine law a child born in custody can remain with the mother for only the first month of their life, though exceptions can be made. By comparison, children born to mothers detained in Malaysia are permitted to remain with them until the age of three or four. In the UK, mother and baby units enable women to stay with their infants till they reach 18 months.

Campaigners persisted in pressing authorities to release Ms Masino and her baby.

“We would tie blue ribbons to the the poles of the Supreme Court gates. They stood for River, the essence of life. We placed candles outside. But they didn’t listen,” said Fides Lim, who heads Kapatid, a support group of families and friends of political prisoners in the Philippines.

“We knew how important it was for baby River to be breast fed,” said Ms Lim, who has also been campaigning for the urgent release of her husband, a political prisoner aged 70.

The hospital where Ms Nasino gave birth recommended the baby be kept with her mother, said Ms Nasino’s lawyer, Ms Deinla. “But the prison authorities said they lacked the resources. They came up with a lot of excuses, violating the child’s right to her mother’s breast milk,” she said.

Under the “Bangkok Rules” – UN guidelines for the treatment of female prisoners – decisions on when a child is separated from its mother should be based on the best interests of the child.

The BBC has approached the Philippine prison authorities for comment but has not yet received a response.

On August 13, baby River was separated from her mother. Ms Nasino was “inconsolable”, said Ms Deinla. “She didn’t want to give up her baby. She was actually pleading that the baby be allowed to stay longer.”

Because of Covid-19 rules restricting access to prisoners, Ms Deinla and her colleagues have only been able to keep in touch with Ms Nasino by phone.

Baby River’s health began to deteriorate the following month, according to Ms Lim. The newborn had been passed into the care of her grandmother, Ms Nasino’s mother, who told the support group that the family were “very worried because the baby was having diarrhoea”, said Ms Lim.

Calls to reunite the mother and child grew more urgent as River was hospitalised on 24 September and her condition worsened. But Ms Nasino was still not permitted to see her baby.

Last week, River died from pneumonia, just over three months old. Her death has shocked many in the Philippines, where tributes and sympathies have flowed on social media.

Many have also expressed their anger at the justice system, with some comparing the recent pardon granted to a US marine convicted of killing a transgender woman in the Philippines with the court’s refusal to allow Ms Nasino to see her dying baby. “*Selective* justice is served,” wrote a Twitter user.

Others highlighted the difference in how the young activist was treated compared to higher profile and more wealthy prisoners who have been allowed temporary release to attend events such as their children’s weddings or graduations.

On Tuesday, a local court granted Ms Nasino a three-day furlough to attend the wake and funeral of her daughter.

But after prison officials intervened to reduce the length of her release she was only permitted to leave jail for three hours on Wednesday and Friday – the day of River’s burial.