Cristiano Ronaldo is a father to five children, as he shared that he sadly lost one of his newborn twins. Find out more about all of his children here.

Cristiano Ronaldo shared the heartbreaking news that his son died during childbirth on Monday April 18. The 37-year-old soccer star had been expecting twins with his longtime girlfriend Georgina Rodríguez, and he shared that sadly their son didn’t make it as she was giving birth. Cristiano told fans the heartbreaking news in an Instagram post asking for privacy.

While much of the world knows Cristiano as a globally-renowned soccer star, the player clearly values his role as a father above all. “Becoming a parent and raising my family is honestly the greatest privilege I’ve had. I’m enjoying every second of it,” he told The Independent in a 2017 interview. Find out more about all of his kids here.

Cristiano’s oldest son Cristiano Ronaldo Jr., 10, was born in June 2010. He announced the baby’s birth, and that the identity of Cristiano Jr.’s mother would be kept secret in a tweet at the time. “It is with great joy and emotion that I inform I have recently become father to a baby boy,” he tweeted at the time, via Telegraph. “As agreed with the baby’s mother, who prefers to have her identity kept confidential, my son will be under my exclusive guardianship. I request everyone to fully respect my right to privacy (and that of the child) at least on issues as personal as these are.”

Cristiano’s oldest son has naturally also taken to love soccer. He’s been spotted on a number of occasions wearing a uniform that matches his dad, and he’s also shown that he’s a natural, when it comes to emulating his dad’s talents, as seen in some videos taken of him playing.

A few years after Cristiano Jr. was born, the soccer star became a father to twins Eva and Mateo, both 4, in June 2017. “Happy to be able to hold the two new loves of my life,” he wrote in an announcement at the time, revealing both of the twins’ names.

At the time that Mateo and his twin sister were born, a rep for Cristian told HollywoodLife that the football star didn’t plan to discuss further reasoning for why he chose to go with a surrogate for the twins. “Cristiano Ronaldo will not share any reason as to why he chose a surrogate mother, he is simply grateful that he now has twins,” he said.

Right after the twins were born, Cristiano’s girlfriend Georgina revealed that she was pregnant with the couple’s first child. She gave birth to their daughter Alana, 4, in November 2017. After their daughter was born, Georgina gushed over the little one in an Instagram post. “Being a mother and raising the little ones in the house all this time has made me experience supreme happiness, and now with the arrival of Alana Martina we are all complete, happier if possible,” she wrote. “We are very happy and grateful to God for the health of our little Alana Martina and of course that of our other 3 little ones in the house, whom I can’t wait to hug and eat them with kisses.”

Four years after Alana was born, Cristiano and Georgina announced that she was pregnant with twins in October 2021. “Our hearts are full of love—we can’t wait to meet you,” the pair wrote in the announcement at the time. Like with Ronaldo’s first set of twins, the pair were expecting a boy and a girl. Sadly, their son didn’t survive childbirth, and the couple announced his passing in an Instagram post. “It is with our deepest sadness we have to announce that our baby boy has passed away. It is the greatest pain that any parents can feel. Only the birth of our baby girl gives us the strength to live this moment with some hope and happiness,” they wrote. “We would like to thank the doctors and nurses for all their expert care and support.  We are all devastated at this loss and we kindly ask for privacy at this very difficult time. Our baby boy, you are our angel. We will always love you.” 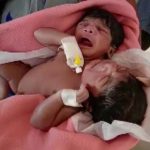 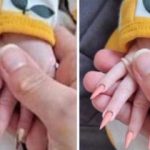