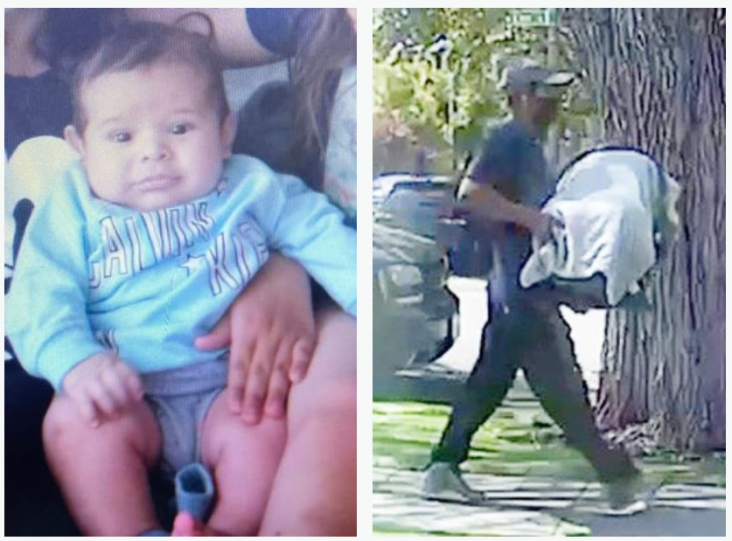 Police are urgently appealing for help in their search for a missing baby who was kidnapped while his grandmother was unloading groceries at the family home.

The kidnapper walked into the California home in San Jose at around 1pm on Monday (April 25) and snatched three-month-old Brandon Cuellar.

The stranger then walked straight out of the home on Elm Street carrying the young child, who was dressed in a onesie with dinosaurs all over it, according to San Jose police.

Police have released surveillance footage showing a male suspect walking with a black baby carrier with white trim, covered by a white blanket.

In a tweet officers confirmed that the “family does not recognise this suspect”.

Police Sgt Christian Camarillo said the little one’s grandmother was looking after him while his mum was at work, reported ABC7. The boy’s father is in prison.

The grandmother had reportedly just got home with her baby grandson from a shopping trip. She put him in an upstairs bedroom while she got groceries out of the car.

He wasn’t alone for longer than a couple of minutes.

Speaking at a press briefing yesterday, Camarillo said: “In that short amount of time, someone entered the apartment…and left with the baby.”

Cops said the grandmother did not see anyone enter the apartment or leave with baby Brandon. The FBI has spent the night knocking on doors in the local area to interview possible witnesses.

The suspect has been described as a man wearing black trousers, a dark blue shirt, a grey baseball hat, grey shoes with a white trim and a face mask.

Appealing to the public for help, Camarillo added: “Today someone is walking around with a 3-month-old baby that they did not have yesterday.

“If you have this baby, please give that baby back to it’s mother. We can deal with consequences after.”

Cops confirmed that baby Brandon’s grandmother and mother are having a “very, very bad time” as they worry about where he is.