A horrifying video has surfaced on social media, which shows a monkey brutally attacking a toddler. The little girl was playing with other children outside the home where she lives when the primate attacked her. In a report, UK-based news outlet Metro identified the girl as two-year-old Paulina, a refugee from Ukraine. The outlet further said that the attack took place in the Russian village of Terpigorievo where she has been living with her parents after being give refuge by neighbour and family friend.

The video, caught on the CCTV installed in the area, is circulating on various social media platforms, including Reddit. It shows Paulina climbing a ladder when the animal suddenly appears. Tugging her to the ground, the monkey also bites the girl.

After hearing the screams of the two-year-old, her parents rush out from the home and see the monkey on top of her. Paulina’s mother picks her up but the monkey lunges and grabs the little girl’s leg continuing its attack.

Her father tries to pull the monkey away, and succeeds too, but it dodges the man and again runs towards Paulina. Her father again intervenes and tries to kick the primate but it shows little fear.

The video ends with the parents running inside their home with Paulina and the monkey following them. 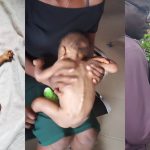