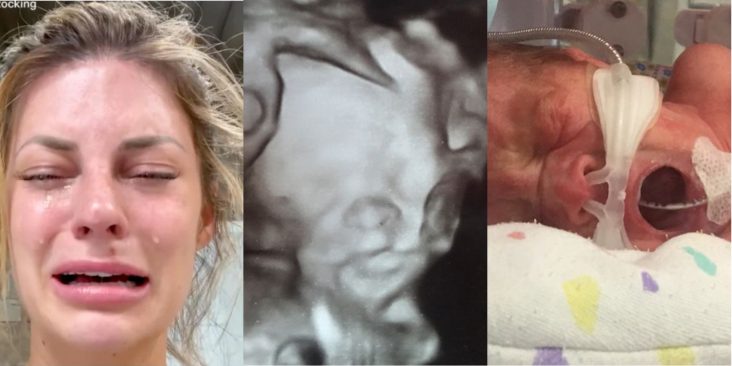 A brave mum has told how she risked her own life to save her unborn baby after spotting a sinister black mass next to the foetus on a 12-week scan.

Mickayla Jordan-Smyth, 30, and her husband Craig, 27, stared aghast at the screen as they faced the terrifying possibility that the shapeless blob could be cancerous.

The screen showed “black holes all over” where the child was supposed to be, “like grapes on a stalk”.

They were told that the mass could be a partial molar pregnancy, which could become cancerous – posing a risk to mother and baby.

But the parents refused an abortion and remained adamant that the pregnancy should continue, despite Craig’s fears that he would lose both his wife and their baby.

Mickayla gave birth via caesarian and woke up screaming ” I know my baby has died” before she was told the child had survived.

Care home worker Mickayla, of Thornaby-on-Tees, North Yorkshire, said: “I knew I was taking a big risk by keeping going with the pregnancy, but I really felt whatever is going to be, will be.

“Poor Craig was petrified that he might lose us both – the baby to the partial molar pregnancy and me if the mass turned out to be cancerous.”

Already a mum to asbestos remover Craig’s son, Lenny, six, and Lewie, 13, from a previous relationship, Mickayla had been excited to see her baby for the first time, when she went to the scan at Middlesbrough’s James Cook University Hospital.

She said: “Suddenly, the atmosphere in the room was filled with tension, as the sonographer said she was worried about what she could see on the scan.

“Turning the screen towards us, I saw black holes all over it, where the baby was supposed to be, like grapes on a stalk.

“I couldn’t even really see much of the foetus and the sonographer said it could be something called a molar pregnancy.

“I’d never heard of it, but she explained how it happens when a lump of abnormal cells grows in the womb, instead of a healthy foetus, which in really rare cases can turn out to be cancerous.

“My other pregnancies were straight forward, so I expected nothing less with this one. Both my other kids were over 8lb each and I had no problems with them at all.”

Sent to see a specialist, it was confirmed that a partial molar pregnancy was the most likely explanation for the mass growing beside her baby.

A rare genetic accident, it normally happens when an egg is fertilised by two sperm and develops with two sets of chromosomes from the father, instead of one female and one male. In around three per cent of cases, molar tissue can develop into a cancer known as choriocarcinoma.

Mickayla said: “I was heartbroken. Although I was only 13 weeks pregnant, this baby was loved. I’d seen the little heartbeat on the screen, seen its kicks and it already meant so much. I sobbed hysterically when I got home.

“But I was adamant I was going to have my baby and do what I could for it, even if it meant I may be unwell, too.

“Still, it was very difficult, as the nurses kept telling us how dangerous it was and everything online said it was high-risk, as the baby had limited room to grow, because of the mass.”

Closely monitored, Mickayla and Craig, who discovered they were expecting a girl at 14 weeks, were shocked at each weekly scan, when they saw the black growth sitting next to their baby.

Mickayla said: “It was just growing and growing. Even the doctors were amazed that the baby hadn’t already died because of the rate at which it was getting bigger.

“At the 26 week scan I couldn’t even see the baby. All that was visible was a mass of black holes.

“I kept thinking the horrible mass was going to smother her and that she wouldn’t make it out alive.”

Alongside worrying about the health of her unborn baby, Mickayla also had to acclimatise to the fact she could need cancer treatment after giving birth.

She said: “I was thinking, ‘If this placenta is cancerous, it’s going to be really big now’.

“I knew the doctors would test it, after the baby was born, to find out and dreaded the chemo I might need.”

Then, at 28 weeks pregnant, on June 27, after going to the hospital after her feet and face swelled up, Mickayla suffered a placental abruption – a serious condition, where the placenta starts to separate from the uterus before a baby is born.

Raced to theatre, she was given a general anaesthetic, while her baby, who she called Raine, was delivered by caesarian, weighing just 2lb 4oz.

She said: “Craig missed the labour, as it only took 15 minutes. When I woke up, I didn’t expect to have a baby. I really thought I had already lost her.

“I was screaming, ‘I know my baby has died,’ and burst into tears when they said she was alive.”

Meeting her baby girl 17 hours later, Mickayla could not believe she had survived.

“She was tiny, but absolutely perfect,” she recalled.

There was more good news to come, when she discovered that, rather than a partial molar pregnancy, she had a benign condition called a placental mesenchymal dysplasia (PMD) – a rare placental abnormality, that can be confused with a molar pregnancy.

During her 10 week stay in hospital, baby Raine experienced a minor brain bleed and a patent ductus arteriosus (PDA) – a kind of heart problem – but neither has caused her any ongoing problems.

Mickayla said: “During Raine’s stay in hospital, I received a letter confirming that I had PMD while I was pregnant. I was over the moon.

“It is incredibly rare, but it’s important people know about the condition, so it isn’t mixed up with a molar pregnancy.”

Now 21 weeks old and happy and healthy, Raine is getting on famously with her brothers. 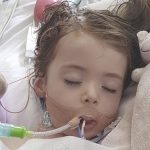